More than 500 years ago, members of the Wappo tribe discovered natural volcanic hot springs in a valley near the base of Mount St. Helena. The first American settlers began to arrive here in the 1840s, and news of hot springs with “healing powers” spread quickly to nearby communities.  (While not politically correct by today’s standards, the area’s original name was “Indian Hot Springs.”)

Built in 1860 by Calistoga founder Samuel Brannan (of “the Calistoga of Sarafornia” fame) and later owned by Leland Stanford, this Historic Inn, still at its original location at 109 Wappo Avenue, was one of the first buildings in Calistoga to be listed with the National Register of Historic Places (No. 685 on the state register to be exact; the Sam Brannan Store half a block up Wappo Ave is No. 684 and is now a private home). One of 14 cottages featured in the grand 1862 hot springs resort – whose 25 buildings included a skating pavilion, hot springs bathhouse, restaurant and dance hall – it offered visitors a place to stay in carefree comfort. Except for about 50 years at the turn of the 20th century, when it served as a private residence, it’s been welcoming guests to Calistoga ever since.  See our photo gallery of historic Calistoga.

Spending the summer of 1880 in the area writing Silverado Squatters, Robert Louis Stevenson described Brannan’s establishment as “a very pleasant way … by which you have a little country cottage of your own, without domestic burdens, and by the day or week.” Today, as the “weedy palm” Stevenson described in front of the cottage towers above the town, the Brannan Cottage Inn still provides a tranquil setting and historic charm without sacrificing luxurious comfort. Now reimagined with state-of-the-art amenities and only steps from the shopping, dining and spas of downtown, it’s the perfect home base for your Calistoga getaway. 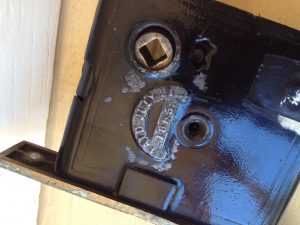 An original door mortise still in use built in 1870

(Two different architectural designs for the resort cottages were chosen by Samuel Brannan. Brannan Cottage Inn is the only existing example of  its style, with gabled roofs, gingerbread scrollwork and a wraparound porch enclosed by arches. Two other Brannan Cottages in the other style still survive after moving to new locations in Calistoga; one’s on the grounds of the Sharpsteen Museum, and the sharp-eyed history buff can spot the third cottage while on the Sharpsteen’s self-guided walking tour. )