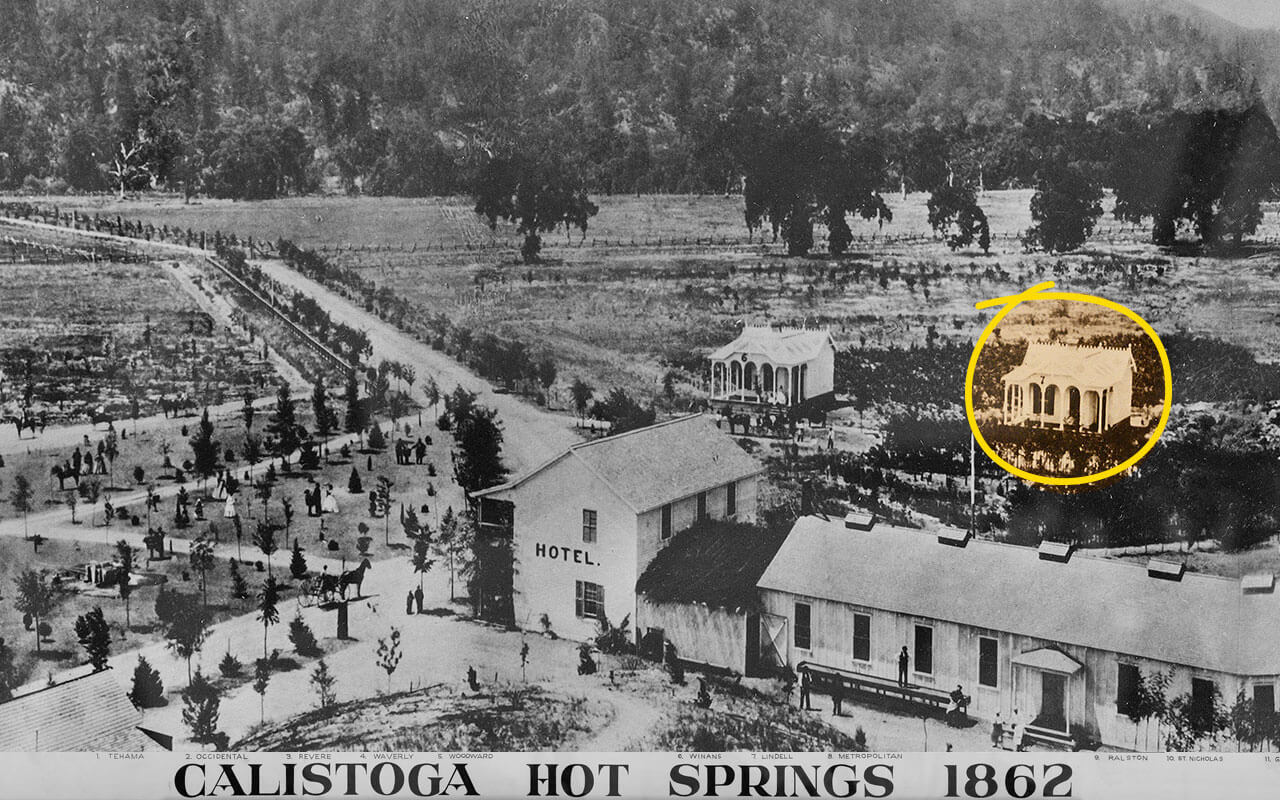 Brannan Cottage Inn was built in 1860 by Calistoga founder Samuel Brannan and was later owned by Leland Stanford.

This historic inn is still located at its original location at 109 Wappo Avenue and was one of the first buildings in Calistoga to be listed with the National Register of Historic Places.

(whose 25 other buildings included a skating pavilion, hot springs bathhouse, restaurant, and dance hall); it offered visitors a welcoming and comforting place to stay.

Except for about 50 years at the turn of the 20th century when it served as a private residence, it’s been welcoming guests to Calistoga ever since, and we are happy to add you to that list of those fortunate enough to experience Brannan Cottage Inn first-hand.

There’s more to Calistoga than its hot springs, world-class wines, and relaxed charm. The natural and cultural history of this northern Napa Valley town adds another dimension to the wine country experience.

Much of the region’s history is still alive in Calistoga, from authentic Victorian architecture to the city’s famous mineral hot springs. In fact, its historic roots are so intact that the National Trust for Historic Preservation named Calistoga a “Distinctive Destination.” It recognizes Calistoga as one of an elite group of American communities dedicated to preserving its town’s character and sense of place.

An excellent short article on Calistoga, its history, and some famous residents is available on Wikipedia.

HISTORY OF WINE IN NAPA

Wild grapes have always been growing in Napa Valley, but it was George Calvert Yount who built one of the first homesteads in the area and planted Napa Valley grapes in 1839.

The first commercial winery was built in 1861 by Charles Krug (before that, the wine was just produced by missionaries for church services), and by 1889 there were over 140 wineries in operation, notably Schramsberg in 1862, Beringer in 1876, and Inglenook in 1897.

The wine business was booming, but things came to a screeching halt at the turn of the 20th century when prices plummeted due to a surplus of grapes, among other things. Then Prohibition came along, and wineries were abandoned for over 14 years, with the exception of some making sacramental wines.

well before the Gold Rush.

In 1944, seven vintners formed the Napa Valley Vintners trade association, which today is made up of 550 wineries.

Robert Mondavi’s master marketing skills over the past 50 years can be thanked for putting Napa Valley wine on the world stage. A pivotal moment was during a blind tasting of Cabernet Sauvignon and Chardonnay from California against the best wines of Bordeaux and Burgundy, when the judges gave top honors to Chateau Montelena Chardonnay and Stag’s Leap Wine Cellars Cabernet Sauvignon. And the rest, as they say, is history.

THE FASCINATING LIFE OF

Sam was born in Saco, Maine, and grew up in Painesville, Ohio.

He learned the printer’s trade while living in Ohio. He and his brother once bought a press and type together in New Orleans.

Sam once worked as a printer in Connecticut alongside the Mormon apostle William Smith. During this time, he met his (second) wife, Ann Eliza Corwin.

From there, they went to New York City and began printing The Prophet newspaper.

As an eventual leader within the Mormon church, Brannan was in charge of leading the eastern Mormons to California.

During the Gold Rush, he owned the only store between San Francisco and the gold fields, where he sold all of the gold-mining equipment available and profited greatly.

In nine weeks during the Gold Rush, he made $36,000. Sam Brannan was California’s first millionaire.

After just one visit to the Calistoga hot springs he decided to open a resort. In 1861, he founded the town of Calistoga.

He was shot 8 times… and survived. Sam unfortunately lost much of his fortune in his divorce, but his legacy will always live on here in Calistoga.

“Their store was an adobe building of one story about 100 feet long by 30 wide situated about 50 yards East of the fort. There was a loft filled with hides and other relics of trade before the mines were discovered.”